We will do our best to accommodate your busy schedule. Please schedule an appointment today!

Please complete this form to request an appointment. Please note that the appointment has not been scheduled until you receive confirmation from us. Thank you!

There is no access to our facility from Hwy 101. Please use 19th Ave., located south of the clinic and take the service road (Merrimac).

‹ back to previous page 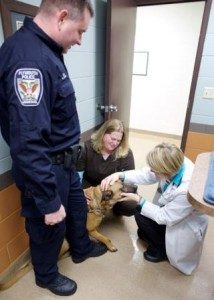 The following is an excerpt from the article written by Maggie Kelly at Plymouth Magazine:

Northwest Animal Hospital loves to introduce kids to the science of caring for animals by hosting kids’ groups and clubs, veterinarian Sara Williams says. But that’s just the start. In addition to community education, Northwest Animal Hospital works with Leech Lake Legacy, an organization that rescues stray animals on the Leech Lake Reservation that would otherwise be euthanized. Northwest volunteers spay and neuter animals so they are fit for adoption.

Northwest created a first aid training course for police K9s and taught some Plymouth K9 officers how to care for their four-legged partners if they are injured or ill. “The kits include medicine to induce vomiting if the dogs ingest drugs, and thermometers and fluids to recognize and treat shock and heat stroke,” Williams says. Just a few months after the training, a dog was saved after the officer recognized the heat stroke symptoms he had learned about in class. It’s one of the reasons they built the clinic in the first place, Williams says. “One of our core values is to give back to the community and share our talents.”